Our new Pupil Parliament structure is an ideal opportunity for more pupils from Reception to Year 6 to be actively involved in the way that the school is run. Pupil Parliament benefits the whole school, pupils, and teachers because it provides opportunities for pupils to communicate their opinions as well as influence the decisions that are made on their behalf.  Pupils relish the opportunity to become a greater part of school life and enjoy making their voices heard.

Our Pupil Parliament consists of one elected child from each class, from Reception right through to Year 6, 21 children in total. The Pupil Presidents and Vice-Presidents are the only non-elected members of the Pupil Parliament, taking the total to 25. The fair election process ensures that all children can stand for elections regardless of their gender, ethnicity, special educational needs, or disabilities. The interests of all children are properly represented by each Member of Parliament through:

Our Members of Parliament Election process is as follows:

Our Pupil Parliament meets every two weeks in the Discovery Zone. Meeting dates and times are decided at the end of each meeting but generally are held on Thursdays at 1.45 pm. In order to give every child in this school a voice all members are expected to attend unless giving valid apologies beforehand i.e. sickness or appointments. Towards the end of the school year the MPs will take part in an assembly where they give feedback to the whole school and parents about what they have been doing throughout the year and their plans for the last term.

Here the Pupil Parliament are discussing changes to the whole school reward system and collating the responses collected from their classes. 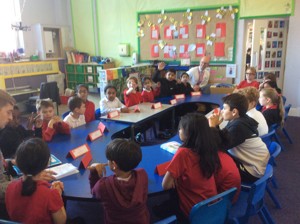 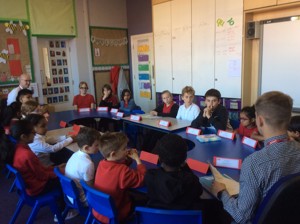 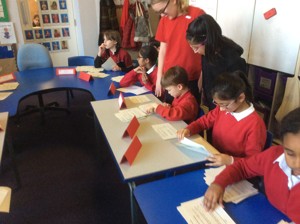 Here the Pupil Parliament are meeting our local MP and Shadow Education Secretary Kate Green MP. They asked her questions about how to be an effective representative and what life is like as an MP. We also had a whole school Q&A session over Zoom allowing every child to have a voice. 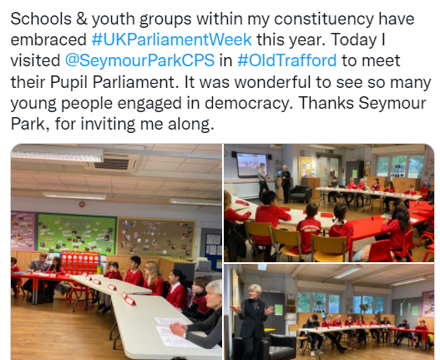